OCTOBER 25th … BALAKLAVA DAY. (a link to the ‘GUNFIRE’ Vlog)

Amongst the cavalry regiments of the British Army…Hussars, Lancers, Dragoons, Light and Heavy, there is a proud tradition of celebrating /remembering the famous ‘CHARGE OF THE LIGHT

BRIGADE’ ..As immortalised by Alfred Lord Tennyson in his epic poem. MY first experience of ‘GUNFIRE’, a la ‘Balaklava Day, was on the morning of October 25th 1969 in the then, West Germany at Munster, Swinton barracks, home of the 13th/18th Royal Hussars (QMO) or, Queen Mary’s Own. I was awakened by a vicious prod to the shoulder and as I sat up realised it was the RSM (Regimental Sergeant Major) and the Squadron Leader (Major) pushing a tea trolley with a Tea urn on it … “With or without”? said the RSM. Thinking he meant sugar, I said, “With, please Sir”…I was baffled and still half asleep. The Major poured a ‘little’ tea in my tin mug and the RSM ( Jack Hatton, or ‘The Badge’ as he was affectionately known…R.I.P.) topped it up with issue rum. The instant I tasted it I was wide awake, much to the merriment of the two ‘Gods’ serving it up to a lowly trooper…and the tradition continues to this day in regiments which took part in the charge, on the morning of October 25th, the other ranks in a cavalry regiment are woken up by the RSM and another High ranking officer with a mug of ‘Gunfire’….black tea and dark rum. Traditionally given to troops about to go into battle as   ‘Dutch courage’…and lets face it the Light Brigade needed courage to charge the might of the Russian guns that day …  October 25th, 1854.

Here is a first hand account of the engagement from a Commanding officer of one of the lead regiments … which one I know not;

Preparing for ‘GUNFIRE’ in the morning….October 25th 1854

“We advanced down a gradual descent of more than three-quarters of a mile, with the batteries vomiting forth upon us shells and shot, round and grape, with one battery on our right flank and another on the left, and all the intermediate ground covered with the Russian riflemen; so that when we came to within a distance of fifty yards from the mouths of the artillery which had been hurling destruction upon us, we were, in fact, surrounded and encircled by a blaze of fire, in addition to the fire of the riflemen upon our flanks.
As we ascended the hill, the oblique fire of the artillery poured upon our rear, so that we had thus a strong fire upon our front, our flank, and our rear. We entered the battery—we went through the battery—the two leading regiments cutting down a great number of the Russian gunners in their onset. In the two regiments which I had the honour to lead, every officer, with one exception, was either killed or wounded, or had his horse shot under him or injured. Those regiments proceeded, followed by the second line, consisting of two more regiments of cavalry, which continued to perform the duty of cutting down the Russian gunners.
Then came the third line, formed of another regiment, which endeavoured to complete the duty assigned to our brigade. I believe that this was achieved with great success, and the result was that this body, composed of only about 670 men, succeeded in passing through the mass of Russian cavalry of—as we have since learned—5,240 strong; and having broken through that mass, they went, according to our technical military expression, “threes about,” and retired in the same manner, doing as much execution in their course as they possibly could upon the enemy’s cavalry. Upon our returning up the hill
which we had descended in the attack, we had to run the same gauntlet and to incur the same risk from the flank fire of the Tirailleur as we had encountered before. Numbers of our men were shot down—men and horses were killed, and many of the soldiers who had lost their horses were also shot down while endeavouring to escape.
But what, my Lord, was the feeling and what the bearing of those brave men who returned to the position. Of each of these regiments there returned but a small detachment, tw

o-thirds of the men engaged having been destroyed? I think that every man who was engaged in that disastrous affair at Balaklava, and who was fortunate enough to come out of it alive, must feel that it was only by a merciful decree of Almighty Providence that he escaped from the greatest apparent certainty of death which could possibly be conceived”.”

And of course the famous Poem by Alfred Lord Tennyson;

The Charge of the Light Brigade

2
“Forward, the Light Brigade!”
Was there a man dismay’d?
Not tho’ the soldier knew
Someone had blunder’d:
Theirs not to make reply,
Theirs not to reason why,
Theirs but to do and die:
Into the valley of Death
Rode the six hundred.

4
Flash’d all their sabres bare,
Flash’d as they turn’d in air,
Sabring the gunners there,
Charging an army, while
All the world wonder’d:
Plunged in the battery-smoke
Right thro’ the line they broke;
Cossack and Russian
Reel’d from the sabre stroke
Shatter’d and sunder’d.
Then they rode back, but not
Not the six hundred.

5
Cannon to right of them,
Cannon to left of them,
Cannon behind them
Volley’d and thunder’d;
Storm’d at with shot and shell,
While horse and hero fell,
They that had fought so well
Came thro’ the jaws of Death
Back from the mouth of Hell,

All that was left of them,
Left of six hundred. 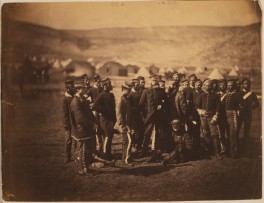 survivors of the Charge

On this day I raise a glass to the brave Hussars, Lancers and Dragoons, who courageously did
their duty….”theirs not to reason why…” … HUSSAR  !!!

This site uses Akismet to reduce spam. Learn how your comment data is processed.